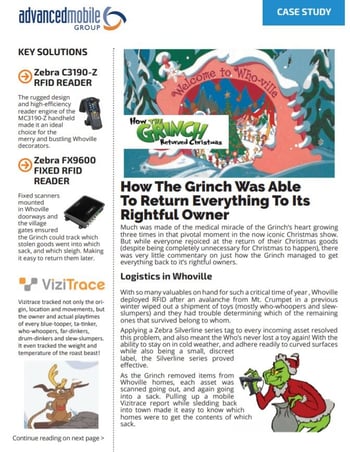 No one likes missing inventory, especially in peak season when demand is high and reputations are won and lost. The Grinch took advantage of Whoville’s leading asset-tracking RFID solution to return Christmas even faster than it was taken.

With so many valuables on hand for such a critical time of year , Whoville deployed RFID after an avalanche from Mt. Crumpet in a previous winter wiped out a shipment of toys (mostly who-whoopers and slew-slumpers) and they had trouble determining which of the remaining ones that survived belong to whom.
Applying a Zebra Silverline series tag to every incoming asset resolved this problem, and also meant the Who’s never lost a toy again! With the ability to stay on in cold weather, and adhere readily to curved surfaces while also being a small, discreet label, the Silverline series proved effective.
As the Grinch removed items from Whoville homes, each asset was scanned going out, and again going into a sack. Pulling up a mobile Vizitrace report while sledding back into town made it easy to know which homes were to get the contents of which sack.