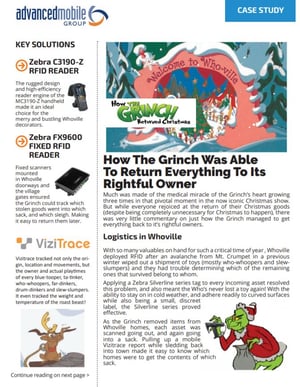 Much was made of the medical miracle of the Grinch’s heart growing three times in that pivotal moment in the now iconic Christmas show. But while everyone rejoiced at the return of their Christmas goods (despite being completely unnecessary for Christmas to happen), there was very little commentary on just how the Grinch managed to get everything back to it’s rightful owners.

With so many valuables on hand for such a critical time of year , Whoville deployed RFID after an avalanche from Mt. Crumpet in a previous winter wiped out a shipment of toys (mostly who-whoopers and slew-slumpers) and they had trouble determining which of the remaining ones that survived belong to whom.
Applying a Zebra Silverline series tag to every incoming asset resolved this problem, and also meant the Who’s never lost a toy again! With the ability to stay on in cold weather, and adhere readily to curved surfaces while also being a small, discreet label, the Silverline series proved effective.
As the Grinch removed items from Whoville homes, each asset was scanned going out, and again going into a sack. Pulling up a mobile ViziTrace report while sledding back into town made it easy to know which homes were to get the contents of which sack.

The rugged design and high-efficiency reader engine of the MC3190-Z handheld made it an ideal choice for the merry and bustling Whoville decorators.

Fixed scanners mounted in Whoville doorways and the village gates ensured the Grinch could track which stolen goods went into which sack, and which sleigh. Making it easy to return them later.

ViziTrace tracked not only the origin, location and movements, but the owner and actual playtimes of every blue-tooper, ta-tinker, who-whoopers, far-dinkers, drum-dinkers and slew-slumpers. It even tracked the weight and temperature of the roast beast!