What is the quickest way for a dock manager to load two trucks from one bay, each with twelve pallets, loaded equally with three different products and intended for delivery at two different stops? This can be done faster with Voice Technology. But how?Though the technology was created almost thirty years ago, Voice-Directed work has only recently become common in the warehouse, mostly for picking. But not only has it expanded beyond picking into other areas of the warehouse, but has steadily moved into entirely new applications like inspection, maintenance, and more. What’s become apparent is that the hands-free aspect of voice-directed work is a real amplifier for productivity, creating even greater savings and efficiencies than other similar technologies.

One truism about most, if not all, new technologies is that they rarely become the “killer app” they are hyped up to be that completely replaces the existing leading technology in place at the time. What we’ve seen time and time again is that each new technology finds its own place in the environment, sometimes replacing the previous technology, sometimes integrating with it, and sometimes not being implemented at all because the older one still does the job better, or has other barriers to adoption. An example of this is RFID, which was once touted as the future to replace all barcoding, fell so far short of that goal that it was almost considered to be a failure, but now has grown to take on a significant portion of the Auto-ID processes in many businesses. But as most users have learned, it has its place where it far exceeds benchmarks for barcodes in some areas, but falls far short in others. Even the biggest internal champion for RFID understands the limitations of the technology and the role that barcodes will still play.

For example, it is entirely possible that incoming cases or pallets might be tagged with RFID tags so the docks and put-away/replenishment areas can track all inventory in gated areas, but the individual products are more efficiently tracked and managed with bar codes. Like other technologies, voice-directed work is finding its place in the warehouse – and its barriers.

Beyond Picking – Voice In the Warehouse

The graphic below from Lydia Voice is an excellent view of a typical warehouse and where voice excels – and where it does not. Highlighted in Green, callouts 4-13 represent processes where Voice can be deployed effectively while the black type processes suggest Voice would NOT improve on the current technologies deployed there. 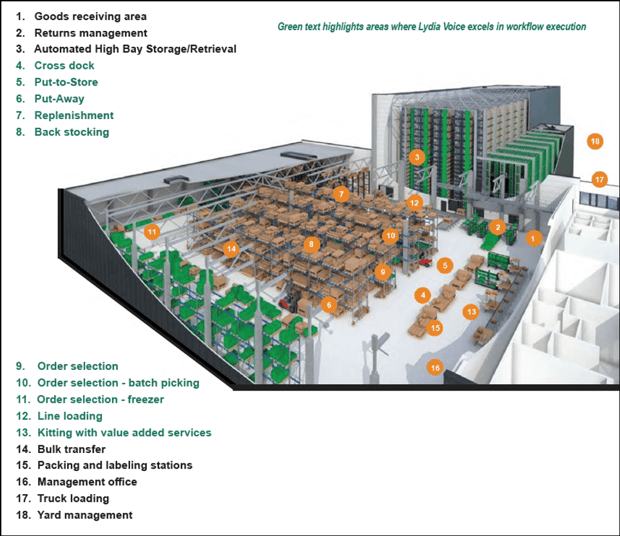 There are excellent use cases now in nearly all the value-added processes in the warehouse. The benefits all across the warehouse have been huge, specifically:

There is clearly going to be a growing role for Voice in the warehouse, but where else does it play well?

Voice Beyond the Warehouse

There are some great use cases for Voice outside of the warehouse, including unexpected places like maintenance and inspection. In the most well-known case study (Lufthansa), Voice Technology has a really innovative method to tackle the connected processes of inspecting and maintaining airplane engines. 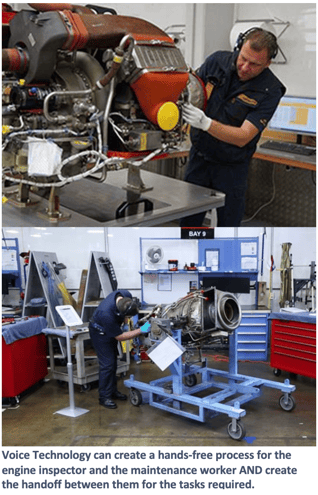 In the first photo, the inspection worker is getting direction from the voice headset that instructs him where to inspect, what to check and what types of responses are expected. A typical sequence might sound like this:

The beauty of Voice Technology in this scenario is that it takes the items identified by the Inspector and automatically adds them to the list of tasks for the maintenance team, which can then utilize the Voice solution to perform the required maintenance duties in the correct order and record the maintenance worker’s confirmation of what was done (or may not have been done).

Is this possible without voice? Of course it is, but it requires clipboards, or tablets and the means to record information on them, both of which require hands. Just visualizing either of the two workers photographed with tablets and a stylus would indicate the Voice solution would allow them to work much faster with the free use of both hands.

Coming At MODEX 2020 – A New Application for Voice

At the top of the article, one of the tasks that was specifically identified as NOT being supported by Voice Technology was “17. Truck Loading”.  But next week at MODEX, our own Jim Donahue will be presenting a new solution that will allow Voice to transform the way pallets are loaded on trucks.  In the case being presented, a food manufacturer needs to load two trucks with twelve pallets (24 total) made up of equal amounts of 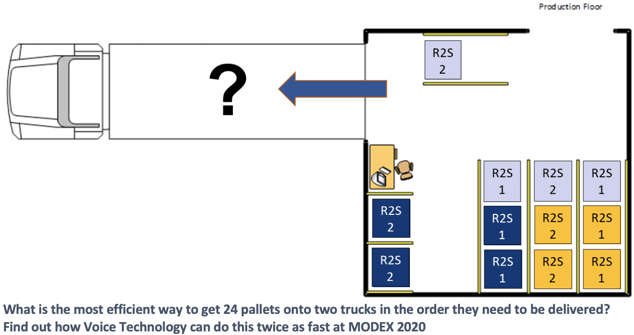 three different products and designated for two separate delivery stops. With some clever coding deployed via Voice, the number of moves required for the pallets is shown to be reduced by 29%, and doubling the speed of the loading process.

How can Voice make such a huge difference in Loading?  If you aren’t going to MODEX 2020 next week, you’ll have to wait a few more weeks to find out here.

If You ARE Going to MODEX…

You can be the first to see the solution in Theater A on Monday, March 9th, at 1:30pm, presented by our own Jim Donahue. Get the specifics here – space is limited!

After the presentation, be sure to find us in the exhibit hall or on the stage:

Jim Donahue, IT & Supply Chain Process Improvement Specialist, will be presenting our latest innovation in Voice Technology at MODEX 2020