The Fishy Side of RFID Technology

Go Fish? Not so fast!

In 2003, investigators in Australia solved an illegal poaching operation using RFID chips. The fish (which were already caught and on shore) had RFID chips inserted into them, and when the unsuspecting fish-burglars took the bait and made off with the “catch,” they soon found themselves up to their gills in legal trouble.

While this early innovation was a creative way to use RFID on a fish, since that time others have been looking at more positive ways that have a more productive objective, though with the fish remaining as in demand as ever.

Now, the idea of a salmon hatchery tagging all its salmon fry at the hatchery before releasing them to their long journey to the ocean sounds appealing, but unfortunately not very practical. However, the application of RFID technology in the fisheries business has grown and is used in a large variety of applications. Here is a sampling of applications we’ve heard about:

Despite the list of concrete examples above, visualizing how any of these works isn’t very easy. But one example that makes it easier for those of us who enjoy seafood is in tracing the catch. Starting from the point of the catch out at sea, fishermen box the fish, and the boxes are tagged and identified. The box can also then be automatically tagged in the system with key information that is considered valuable to the consumer: Catch date, location, size, and quality are not only automatically assigned, but then relayed to shore as well for an existing – or potential – buyer. While smaller fish are boxed and documented this way, one can imagine a larger fish, like a high-value tuna, could not only be tagged directly but include information on aspects like fat content that drive the bids from Japanese buyers waiting on shore who will put it on the next plane to Japan.

It even allows the buyer to complete their transaction even before the catch reaches shore.

With fisheries management becoming a strict, science-based practice that involves collaboration between fishing fleets, governments, and scientists, RFID plays a role in making it work more effectively. Applications can be used to keep tabs on quotes, overfishing, and bycatch. By extending the range of those policing fisheries, it can also reduce the manpower required for enforcement. Given the reliance around the world of so many cultures and sea-dependent regions, the technology makes it easier to manage fish stocks and maintain healthy fisheries.

Finally, dishonest fishermen can be weeded out if they are breaking the rules, or passing off fish that may be unsafe for consumption.

Fish on The Run 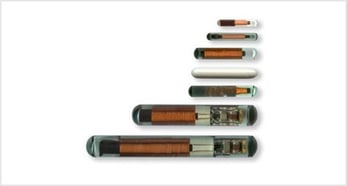 While the bulk of the benefit in this space appears to be for commercial fishing purposes, science has specific gains derived from this technology too. Using an RFID chip called a “PIT Tag.”  These tags are available as small bioglass encapsulated tags, and they come in bulk or preloaded sterile in an injection needle. And yes, individual fish are tagged, and their movements can be traced using readers and antennas mounted over streams, rivers, inside culverts, etc.

In the Pacific Northwest, there is a region-wide effort run by the fisheries management agencies and research organizations to monitor fish movements as part of the effort to not only preserve but restore the natural abundance of salmon this region was originally famous for. Tagging nearly 3 million fish per year, their systems have read over 150MM scans since being implemented with automated detection equipment installed all around the region. Data and reports are provided on their website for free to any organization who needs them and the general public.

One tag applied to a steelhead salmon in 2005 was found in 2007 in a sooty shearwater chick in New Zealand!

Next, it’ll be Sheep! Or Tomatoes!

With such a complete set of applications that can be used with something that is seemingly inappropriate for RFID, it illustrates the viability of the technology in other spaces you may not have considered. The likelihood that your potential application hasn’t already been created and is available as an almost off-the-shelf solution is pretty high. And yes, RFID solutions have already been applied to the sheep-raising and tomato-farming business too.

Rather than focus your energy on how to apply RFID to your business, why not first ask the relevant questions to an expert? “How can we improve Process A or B?” or “What is our biggest area of waste or lack of transparency in our business?” The experts here at Advanced Mobile Group can help you find the answers to these and other questions.  Contact the team today!