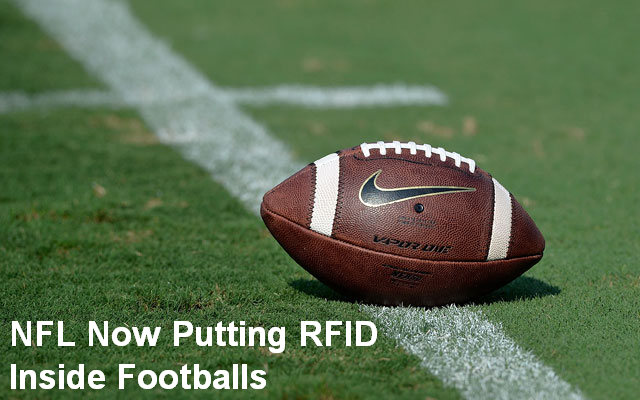 In the wide world of sports, data tracking is everywhere. Whether it’s looking at the stats of each player or assessing a team as a whole, the entire industry seems to run on numbers. No matter how good you are as a player, your legacy will always be broken down into a set of data by which you can be compared to everyone else in your sport. Nowhere is this more necessary than in the world of fantasy sports, where stats can make or break your team.

At this point, you might think that everything that could be measured is being measured, but it turns out that there are still a few stones left unturned. This coming football season, however, we are going to get one more statistic from a place you may not expect: the ball itself.

Using small tags that are implanted into each football, RFID scanners will be able to read and register all kinds of new information, from speed, angle, and even the axis of rotation. Since the tag is inside the ball, all of this data will be live streamed as it happens, rather than having to be analyzed after the fact.

RFID tags and scanners have been around for a while, but mostly they have been used in manufacturing and retail as a means of counting and tracking inventory. However, with this new program starting, it’s clear that the technology is capable of so much more than that.

We’ve already seen how RFID chips can be used in the game, as players have started wearing chips in their shoulder pads as a way to track movement on the field as well as impact statistics.

Well, there are two primary reasons that NFL teams are doing this. First, it’s so that they can better understand the dynamics of the ball while it’s in flight so that they can make adjustments and share it with the team. Since this data is all relatively new, it’s unclear what the effects will have on the sport overall, but many teams believe that there is some real untapped potential.

The second reason to start doing this is for fantasy sports. Since fans are already poring over data and numbers to better enhance their teams, having one new metric by which to measure quarterbacks could potentially give an edge to those who can process that information.

Overall, it seems like tracking your favorite players will include much more data than just the number of passes and touchdowns. Now you can see which quarterbacks can throw the ball more accurately and account for things like wind resistance, spin, and weight.

How’s It Going to Work?

Currently, the NFL has been practicing with RFID-enhanced balls, but they have not made it out onto the field during a live game. That is all going to change with this season, however, as they will begin tracking stats from the start of the season.

The information provided will be given to broadcasters and other media outlets as a way to both enhance the viewer’s experience as well as provide detailed data for fantasy sports leagues. The tags are so advanced that they will capture and relay information 25 times per second during every play of every game. This is more than twice the amount of data received for players, as the ball moves much faster than they do.

Zebra Technologies is the company that is providing all of the tags for the League, and they working closely with Wilson Sporting Goods, who makes all of the footballs that are used throughout the NFL. The tags are small enough to be implanted quickly without affecting the feel or weight of the ball. In short, players won’t even know it’s there.

Last year, the data collected was not made available until the end of the season, but now that they’re going “live,” it will be ready for broadcasters and the media within 24 hours of each game across 32 teams.

Overall, since this is still new ground being broken in the field of sports, it’s unclear what kind of impact it will have across the league. One of the main hopes is that it will help bring new viewership to the games, as they will see much more data during the broadcast. Having another type of analysis can breathe new life into the game and how we watch it.

The other thing that team managers hope to use this data for is as a training tool for players. As they throw the ball, they can see how external elements affect its trajectory and speed, so they could hopefully learn to compensate.

Overall, we have to wait and see what will happen. The result could be more exciting games where quarterbacks can accurately throw the ball anywhere on the field, or it could just be a novelty item that doesn’t hold much sway in the minds of viewers. However, if it does catch on, we can expect to see RFID bleed into other sports as well. Someday, there may be chips inside of baseballs, basketballs, and even soccer balls. The sky is the limit.

How Can RFID Help the Environment?
What's Your Company's "RFIQ"?
Twas The Week Before Christmas, And In The Warehouse….
2020 Industry Report