Buried near the bottom of this year’s “The Future of Fulfillment Vision Study” from Zebra is an interesting section on the future of supply chain technologies. This week we’re going to share some of the high-level insights they shared and go a bit more in-depth on a few of them.

As the Zebra article notes, the digital economy continues to march through the industry and eliminate more and more of the manual processes remaining from the pre-internet era. The explosion of the “distribution center” model that has resulted in both the conversion of traditional warehousing operations into omnichannel fulfillment centers AND the rapid expansion of new sites has increased total warehouse space by billions of square feet. While the US is blessed with lots of wide-open spaces and has accommodated the growth without too much upward pressure on the price per square foot, those spaces also tend to be in less populated areas which exacerbates one of the most important drivers of technology investment – labor shortages.

To counteract labor concerns, the supply chain decision makers polled by Zebra are looking to automation as the solution that will offset the shortages. In some cases, businesses that are not current with the existing standard technology have opportunities to “leap-frog” the common current solution that may require a similar staffing level with something new that reduces the need for scarce staffing.

The chart below reflects a high-level summary of the technologies they see as being “transformative”:

Technologies Worth A Look Right Now

Going a little deeper, let’s take a look at a few of the technologies identified that might be more ubiquitous in the short term and go a little deeper into what they are and how they will change things: 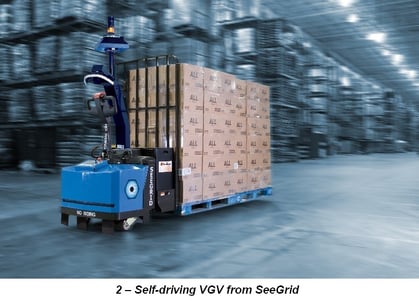 Autonomous vehicles – For the sake of this discussion, we’ll consider this under the broader category of “robotics.” And for the sake of staying grounded, we’ll stay out of the drone discussion for now and stick to option inside the facility. There are already quite a few options in the marketplace that allow facilities to automate the transport of cases and pallets in the warehouse. Others automate the storage in a dense set of racking, resembling those storage towers seen for boats and cars in some denser urban areas.  (see photos)

Some factors that may be a deterrent for some facilities revolve around potential safety issues and for a diverse facility operating as a full distribution center, the reality of this process area not having a large percentage of the labor to start with, thus reducing the financial benefit and extending the time to achieve a positive ROI.

Wearable Mobile Technology – While everyone should be familiar by now with wrist-mounted mobile computers, the potential for wearable technology has gone well beyond what was essentially the miniaturization of a computer. Voice collection may be the killer app of the decade if businesses ever fully comprehend the full range of possibilities it can be used for. Most importantly, for an omnichannel environment, it seems to have a sweet spot in the picking aisles, where most of these facilities will have up to half of their staff. Labor hours saved here will justify the investment more than most other options in other areas of the facility. For a  more detailed look at the potential for Voice Collection see our earlier blog.

And while Google Glass seemed to have made some early adopters receive a lot of unwanted negative attention before everyone removed them for good, the industry has not given up on the concept of using the traditional eyeglass structure as a vehicle for computing power. Like Voice Collection, eyewear allows for a hands-free experience, and while it would focus on presenting information to the user “on-screen” at a personal level, it could also carry a voice element with the simple addition of an earbud to the frame.

Finally, it is worth noting one additional, simple technology which is a simple RFID application for worker safety. Useful for any work site with potential hazards (i.e. construction sites), this option allows workers to carry a tag that indicates where they are at all times and can be an effective way to speed evacuations or identify everyone quickly after an incident. For a more detailed look at this technology, see our earlier article.

Zebra’s study indicates that the market for enterprise wearable devices is expected to skyrocket by 75% by 2021.

Internet of Things – as some of the previous examples are starting to suggest: “everything is connected.” The Internet of Things (IoT) will lead to a growing number of physical objects getting connected intelligently. While much of the focus tends to be on NEW devices, IoT will lead to a rethink about some of your existing devices as they get connected to your network. There are many simple examples you can visualize in your existing business. For example, imagine any of your current equipment that is mobile (anything from a scanner to a cart) having an RFID chip so that at any time it can be located if it was not returned to its proper storage area for recharging or safekeeping at the end of a day. Or tagging bulk storage goods so more data can be tracked like location, length of time in storage, movement between spaces, etc.  By some estimates, there will be over 75 Billion devices that have connectivity worldwide by 2020.

According to Zebra, it is a slight paradox that while supply chain executives have highlighted key disruptors, they seem to be taking a wait-and-see approach when it comes to investing. For many, these technologies are being implemented more as tests to determine their return on investment rather than a full-scale rollout.

Facility managers also face the challenge of managing these technologies across the many moving parts of their supply chain for an effective omnichannel strategy, while implementing them to work seamlessly with existing legacy systems — which is no easy feat. However, one aspect that is often overlooked is that while the shortage of labor is the driver of a longer look at technology, the cause of the “shortage” is not always a lack of potential workers, but a lack of competitiveness in the labor market. As a traditional “back-end” job, DC labor is perhaps more underpaid than it traditionally has been even as the added-value of most businesses has moved from the front of the retail store to the warehouse where products are not only picked and shipped but often customized, packaged, etc. As the last person who touches the product before the customer sees it, the staff working in the DC has a larger impact on the customer experience than they are given credit for.  Managers not convinced that automation will give them back what they invest right away might do better looking to improve hiring, training and retaining of their labor force and be seen as a desirable workplace in your area as an alternative to jumping into automation or other unproven technologies if the ROI is not there.