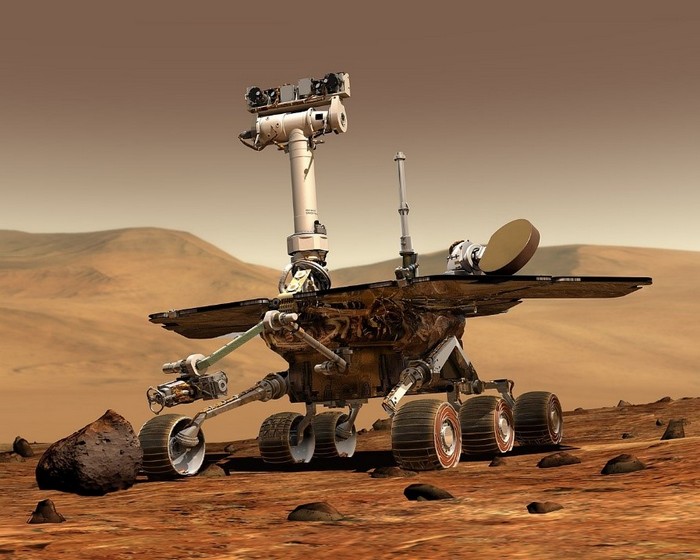 Just as the holiday season got underway just over a month ago, NASA’s InSight Mars Lander became the latest successful attempt by we earthlings to explore our universe a bit more. The scenes of the landing and the operation of the Lander itself were inspiring. And the mission – dedicated to investigating the deep interior of Mars – is ambitious, even though just getting there may have seemed ambitious enough. But have you ever thought about one of the unsung hero details of this operation? There are actual LABELS on Mars now!

It is commonly said that the typical consumer product coming off the factory floor will have an average of about thirteen labels. Labels will come in all shapes and sizes, as well as materials and adhesives, and come in with some of the parts, applied during assembly, or printed/applied during packaging. Some parts might just be a simple barcode, others might reference an application it is meant for, others might have a sequential number used to track defects, etc. But imagine the labeling that needs to go on the Rover!

To begin with, it’s a good idea to first realize just how BIG this thing is. The photos from the surface and the animated representations of the mission don’t provide adequate points of reference to understand the size of this machine. It’s a lot bigger than the impression we get of a Toys ‘R Us remote controlled radio car. Here are the technical specs from NASA:

Basically, it’s a sized a bit like a small limousine, but less than a third of the weight. The robotic arm itself is almost six feet long, and roundish solar panels are seven feet in diameter. It’s got two cameras, six wheels and a battery of scientific instruments designed to raise the level of what we know about the makings of the planet itself: a seismometer, a heat probe, weather sensors, and a radio instrument that measures the wobble of its North pole as the sun pushes and pulls it in its orbit – something that will indicate more about the size and composition of Mars’ metallic core.

But what kind of labels would NASA need for such a project? Temperatures in space can be very extreme in both directions. And what about the impact of space dust and the wind and particles on Mars itself? 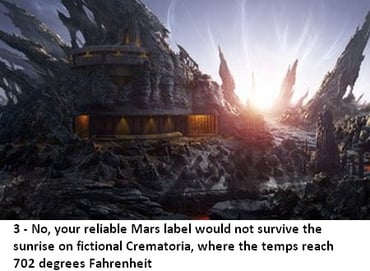 The average temperature on Mars is about -80 degrees Fahrenheit (-60 C). And on this mission alone, NASA has seen daytime temperatures reaching as high as 43 degrees (6 C). But at the poles, temperatures can get as low as -195 degrees F (-125 C).  So, assuming we Lander is not going to travel through inner space, which can be as cold as -455 degrees F (-271 C), the labels would need to be something on the order of Cryogenic labels, which have operating temperatures of up to -200 degrees F (-129 C).

But that’s not all. According to NASA, the humidity on Mars has now been measured to be close to 100% every morning, as the nighttime frost that forms vaporizes into the air again (and incidentally providing a potential source of water that could be captured if needed). Even with good cryogenic labels that can 1) withstand the cold and 2) has an elevated temperature resistance above and beyond Mars’ high temperatures (70 degrees F/20 C near the equator), what kind of label can handle that up and down EVERY day AND do it with the constant extreme change in humidity too?

So What Do They Use?

It’s not entirely clear what is being used on the various parts of the Mars Lander that could help us learn how to label our own space equipment. But there are few tidbits out there regarding what NASA uses in the International Space Station:

While these labels are definitely a candidate to avoid the extreme heat in some parts of space, they are probably not the one found on the Mars Lander unless there is some temperature control going on inside the unit that would protect them and its parts (which is probably very likely).

How about you? Do you have any extreme environment issues with your barcode labeling or RFID tags? If anyone out there is in the know about the specific labels actually on Mars today, we’d love to hear from you too and we’ll update this article for everyone later.

The Risks of Using AI to Grow Our Food
How Augmented Reality is Changing Robotics
Robotic “Bugs” and How They Could Revolutionize the Industry
Microswimmers: What Are They and Why You Should Care