How Augmented Reality is Changing Robotics

Since their invention, robots have been helping humans in manufacturing and other industries be more efficient and have safer processes. Over the past several years, modern technology has offered immersive platforms using augmented reality (AR) for media and gaming. But the two are now merging where the field of augmented reality is beginning to change the face of robotics.

What is Augmented Reality? 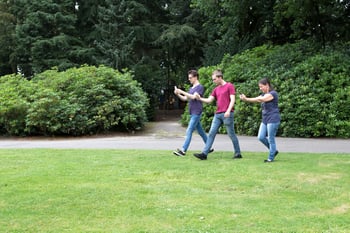 It’s been nearly three decades since the tech world adopted the term “augmented reality.” But what does it mean? AR refers to the overlay of virtual or computer-generated content over a real-world image. It can be triggered by anything, such as a location, an image, or a combination of the two.

Augmented reality isn’t the same as virtual reality, where everything you see is computer-generated. With AR, you maintain a real-world focus with the addition of some enhanced elements.

Pokemon Go and Google Glass are two examples of AR technology. One allows you to play a game where characters are superimposed on real-world places. The other puts your smartphone screen in front of you virtually.

The Benefits of Augmented Reality

If your business is already leveraging robotics for automation, why even consider something that also incorporates AR? Here are just a few of the benefits of this technology.

Have you ever tried reading instructions while completing a task at the same time? It can be challenging and invite errors. When you are overloaded with tasks and information, it’s tough to be efficient.

Augmented reality presents information in digital snippets where and when it is needed. It spares the user from having to undertake unnecessary steps to access the information they need.

2. It Enhances the User Experience

As you can probably guess, AR is going to improve engagement and heighten the user experience. It’s why it’s used so much in gaming and entertainment applications. Work doesn’t have to be a terrible experience for employees. AR can make just about any task more engaging and even improve employee satisfaction and job retention.

Not every business uses AR. In fact, most don’t. Whether you’re a logistics business, an eCommerce company, or operate a warehouse, using the latest technology can give your organization a competitive advantage. It demonstrates your commitment to efficiency, accuracy, and employee wellbeing.

How Augmented Reality Is Transforming Robotics

The market for AR technology continues to grow each year. In 2020 alone, it was worth an estimated $18.8 billion, with a 78.5% over the prior year. A majority of the growth in AR is taking place in the commercial sector. So how is AR changing the face of robotics? Here are just a few of the ways these two are already working together.

One of the best uses for AR and robotics is in training. First, using neural networks, AR can be used to train robots to perform certain tasks. This is much quicker than writing thousands of lines of code. But AR can also be used to train humans by overlaying computer-generated images over reality to guide them through tasks. 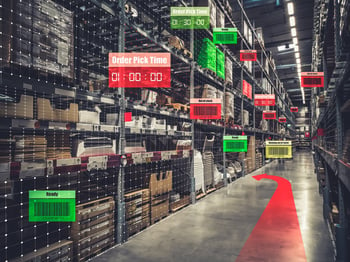 AI-powered robots are generally exposed to a wide range of data. Robots can learn to group similar objects together and identify them based on their characteristics. This is valuable for things like inventory management and automated picking processes in warehouses, among other commercial uses.

Robots equipped with AR can assist workers with a variety of operations. For example, by wearing a headset similar to Google Glass, a worker can get visual instructions for picking orders in a warehouse or the repair or maintenance of a piece of machinery. The technology can lead the worker to the right place and provide step-by-step instructions for a task.

Many healthcare facilities are now using robots for simple to complex surgeries. Surgical robots can use AI to analyze the data they collect from various sensors and AR to scan a patient’s body parts. An AR-based exoskeleton can assist a person with a disability in moving, standing, or sitting.

In the military, advanced robots are being used to detect hidden dangers and are relaying that information back to human soldiers wearing AR-powered headsets. AR is also being used by pilots for weapons targeting and spatial orientation, with data superimposed on the pilot’s visor, so they don’t have to look down at the instruments all the time.

AR is being used in space exploration already since real-time control and communication are impossible. For example, astronauts use a headset called Sidekick to provide hands-free assistance to crews completing tasks. The headsets offer 3D diagrams and schematics, allowing the engineers to keep their hands free.

There are even uses for AR and robotics in the criminal justice system. When a case goes before a jury, it can be challenging to paint a true picture of a crime scene or a potential scenario. But AR-enhanced robots can help jurors explore a crime scene more accurately to improve case outcomes.

The Future of Augmented Reality in Robotics

While the convergence of AR and robotics is taking place in logistics, healthcare, manufacturing, and defense, the potential for its use in just about every sector are nearly limitless. In fact, it’s likely that AR-powered robots will do more than just elevate what existing robots can do. It will also unlock innovation for new applications that no one has conceived of yet.

AR is changing the game for robotics in many positive ways. This new approach to robotics allows humans more insight and control into the robotics that is helping improve a business. It’s an ideal approach for cobots, which would enable human operators to work directly with machinery for automation purposes.