When it comes to some areas in your warehouse, big improvements are often hard to come by. This is especially true for typically labor-intensive areas like picking, or other areas where the work is irregular in timing and cumbersome, like Receiving.

A typical revision to an established and high-functioning picking process will lead to marginal improvements like going from 99.7 to 99.8 accuracy or improving from 430 picks/hour to 445. While these improvements spread over time, people and facilities do add up to significant improvements, a truly BIG leap for a business is not that easy to come by (unless you are one of those businesses still not using barcodes, or batch picking, etc.).

Voice Collection solutions, however, have the potential to change that for many businesses. Today we’ll look at four separate case studies from Honeywell’s VoCollect VoiceExpressTM Enterprise ConnectorTM application, which has applications far more diverse than you may have previously considered.

This Hospital Supply company was doing everything right – as they grew they stayed committed to high levels of customer service (same day delivery is a must in this business), but by doing so risked a downward spiral in margin as they grew. Not only did they improve things drastically moving to hand-held computers and eliminating paper, but their picking accuracy was already at 99.5%.

Bringing Voice Collection into the mix came after site visits to other successful implementations. The surprise for management was the size of the gains. Rather than being incremental, they were significant: An additional 12% improvement in productivity and an improvement in pick accuracy from 99.5 to 99.9%.  It also became a visible advantage in recruiting new employees as well as a feature of sale and marketing presentations to demonstrate they can compete with national distributors with their leadership in productivity technology.

Activity Profile: Coldest environments for any food product at -40F⁰ (for manufacturing) and -20⁰F (for storage).

Challenges: Cold temperatures limit available technology to use on the floor, picking measurements very strict, measured per ORDER rather than per ITEM.

A global ice cream giant certainly had to be doing something right to attain that level of revenue and reach around the globe. But the constant desire to improve led some of the major distribution centers to conclude that they were operating at close to peak effectiveness with their current processes and systems. Making a true leap into another level of productivity would require thinking differently, and Voice Collection became the avenue for doing so.

In this case, not only did the company see big benefits in productivity by being able to double up the orders picked on a single trip into the freezer, but they also benefitted from the technology that kept the hardware working in those temperatures AND was able to deal with noise levels of up to 80 decibels in the freezers from the fans and compressors.

For their efforts, the ice cream maker was rewarded with a 50% increase in accuracy, 15% productivity increase and a positive ROI in less than 12 months.

Activity Profile: Two Distribution Centers with a total of 50 employees carrying 2,200 SKUs, receiving over 1500 different products each month from around the world and shipping 18,000 orders each month across Canada.

Challenges: Rapid growth of orders and the shrinking size of them was slowed by both paper-based and RF systems, which included too many steps to manipulate the scanner and read the screens, etc. while handling product.

Initially implementing Voice Collection in the cluster-picking process, the quick success had it rolled out quickly soon after to cycle-counting process. The speed of order fulfillment increased, and it allowed them to scale faster for the increase in smaller, more frequent, orders. Being a direct-to-consumer retailer also meant managing a large spike in activity for the holiday season, typically from September through December (when most retailers do about 60% of their annual sales).

The new system saw them improve throughput by 30% and accuracy by 15%.  Previously, complete RF training took 2-3 months but with Voice Collection technology that has been shortened to one hour for the initial training to get out on the floor and a week for full operational training.

Market Served: National distributor of irrigation products to over 200 locations in the US for agriculture, landscaping, golf courses, etc.

Activity Profile: Complex order fulfillment of many odd-size items from wheelbarrows and fertilizer bags to small parts for micro-watering systems and PVC pipe.  Shipping up to 2,000 orders per day from a single facility in Arizona.

Challenges: Transition from paper to handhelds created new problems in handling equipment while picking and aggregating orders with bulky products.

Perhaps saving the best for last, this distributor was having trouble creating a balance between the accuracy, speed and reporting benefits of their new scanner technology with the employee experience that was made difficult by the wide variety of product sizes they had to manage. An order calling for a half-pallet of fertilizer and a half-dozen sprinkler heads doesn’t lend itself easily to a simple pick and pack scenario.

Once they implemented Voice Collection, they experienced a tremendous increase in productivity. The best example is how it allowed them to multi-pick items with sequential numbers. Rather than scanning 20-30 items of the same SKU, they could read off the first and last numbers only, and the computer would register all of those in-between as part of the order.

While they officially list their gains as “20% improvement in productivity and accuracy”, there was one more data point that indicated a MUCH bigger gain:

Put another way, it was talking 8.6 hours of labor per week per store BEFORE Voice Collection, and only 3.4 hours AFTER it was implemented. That is a 63% reduction in hours per store served, but also 58% increase in productivity! 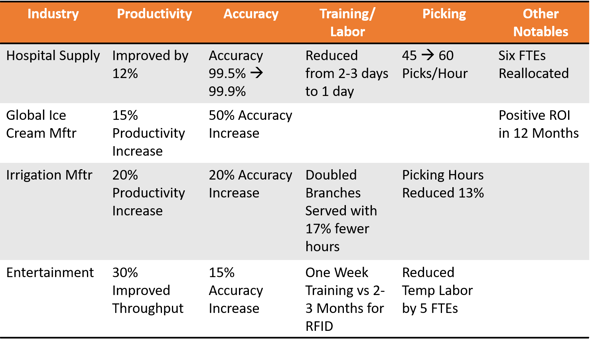 Summing Up the Benefits

In what is clearly a very diverse set of industries illustrated here, there is a fairly uniform set of gains seen by each business implementing Voice Collection.

Aside from the standard KPIs indicated here, there is also a strong sense that employee satisfaction and morale are positively impacted by being able to work hands-free, unencumbered by scanners or other handheld devices.